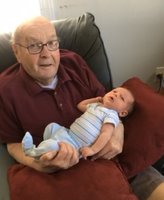 John J. Hanlon, 83 of Raleigh, NC formerly of Clifton Park, passed away peacefully on March 16, 2021. Born on June 15, 1937 in Albany, he was the son of the late Leo and Marguerite Hanlon. He was predeceased by wife Audrey Hanlon, and his brothers Leo and James Hanlon. John graduated from CBA and enlisted in the Air Force in 1956. He spent his career with the US Postal Service, primarily working out of the New Karner Rd. location for 33 years until he retired in 1995. He is survived by his daughters, Mary Pat (John) Righi, Kathleen (Mark) Saltamartini, son, John J. (Donna Sabatino) Hanlon, his brother Joseph (Karen) Hanlon, grandchildren, Julie, Kyle, Kerry, Jaime, Johnny, Kaleigh, Justin, and Blake, great grandchildren, Riley, Kayden, Bailey, Jackson, and Georgia, and several nieces and nephews. Calling hours will be held on Thursday, March 25th from 9 to 11 a.m. at the Catricala Funeral Home Inc., 1597 Route 9, Clifton Park, with a funeral Mass at 11:30 a.m. at St. Mary’s Church in Crescent. Burial will be in Saratoga National Cemetery. In Lieu of flowers, donations may be made to the Regional Food Bank, 965 Albany Shaker Rd, Latham, NY 12110.