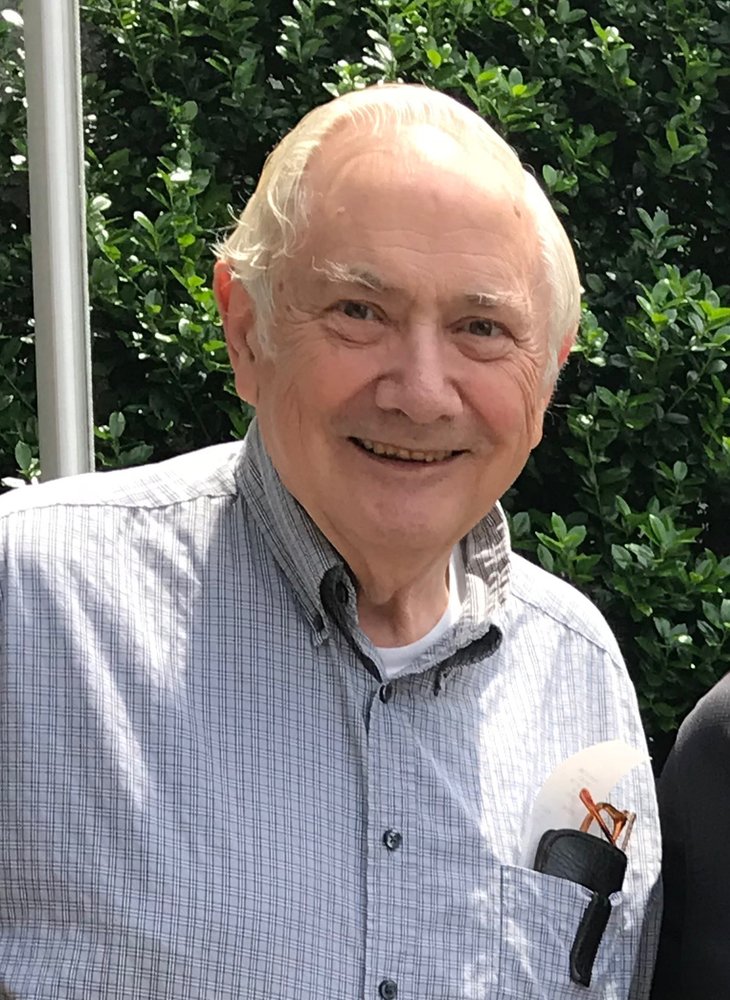 It is with great sadness that we announce the passing of Richard F. Burchill, known to friends as Dick, May 20, 2019, at age 81.

Dick was born and grew up mostly in North Dakota where his brother Bob Burchill, sister Joy Rand and much of his extended family still reside. During World War II he and his family lived briefly in Seattle Washington where Dicks father, Jack, worked as a butcher in the area’s ship and aircraft building industries intensified with the war effort. After the war, the family returned to Colgate North Dakota, where Jack was Postmaster General and ran a general store (the only one in town). Dick’s mechanical skills became evident early on one summer as he and his brother Bob took on the challenge of  building a motorized bike. Being over 6 feet tall by early high school, Dick was, naturally, on the basketball team, practicing in the unheated gym early mornings during the North Dakota winters. Dick was one of 4 people in his high school graduating class and went on to get a bachelor's degree in mechanical engineering from the University of North Dakota. While at UND he met his wife of nearly 60 years, Gerry.

Work opportunities inspired Dick and Gerry to relocate, first to Peoria, Illinois to work for Caterpillar Tractor and eventually to Clifton Park, New York where they’ve lived since 1970, raising their two children, Steve and Robin. In New York, Dick worked for MTI and Shaker Research. He and several of his co-workers at Shaker were honored with an award from NASA for creating an important analysis system used in the Space Shuttle. Eventually he struck out on his own, creating Vibration Consulting Services, through which he consulted on projects all over the world. Summer vacations found the New York Burchills visiting family in North Dakota, camping and sailing in the Adirondacks or off the coast of Cape May Massachusetts. Dick and Gerry were founding members of Prince of Peace Lutheran Church where Dick was a deacon. Dick became an “honorary china painter” helping Gerry as she excelled as a teacher and organizer within the New York World China Painters Association. They also had a business selling antiques, which Gerry continues to this day.

Dick enjoyed a good cartoon and would clip and share a select Garfield, Dilbert or Gary Larsen panel to those he knew would appreciate it. He had a soft spot for animals, especially cats. He seemed impervious to the cold and rarely wore a jacket heavier than a glorified windbreaker. He seemed to be able to fix anything.

But most significantly, Dick never felt more at peace with the world than when he was helping others, without need for recognition or glory. His kindness, thoughtfulness and humility is what we’ll remember the most.

He will be greatly missed by many, but particularly by his wife, Gerry; his son Steve Burchill, Steve’s wife Sheri; his daughter Robin Burchill; his grandson Brent Burchill and wife Coleen; granddaughter Stephanie Burchill and youngest grandson Sawyer Gerstel. He was predeceased by his son-in-law - husband to Robin, Bill Gerstel.

All are welcome to join us at the memorial service held on Sunday, June 9th from 1 to 3 p.m., with a memorial service at 3 p.m. at the Catricala Funeral Home, 1597 Route 9, Clifton Park. In lieu of flowers, donations can be made to Prince of Peace Lutheran Church, 4 Northcrest Dr., Clifton Park, NY 12065

Share Your Memory of
Richard
Upload Your Memory View All Memories
Be the first to upload a memory!
Share A Memory
Plant a Tree