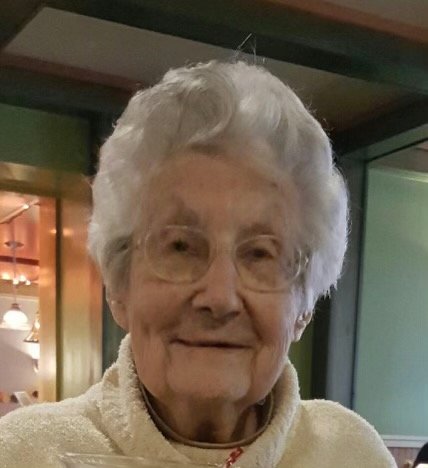 Please share a memory of Elizabeth to include in a keepsake book for family and friends.
View Tribute Book
Elizabeth Ann “Betty” Stewart, formerly of Loudonville, entered into eternal life on May 21, 2021 following a brief illness. She was born on February 9, 1926 in Troy, the daughter of Patrick and Elizabeth Donovan. She was predeceased by her husband of 67 years, John “Jack” Stewart, daughter Jacqueline, sister Patricia, brother Jack, and grandsons Robert and Christopher Stewart. Betty graduated from Catholic Central High School in Troy in 1944. Following graduation, she was employed by the Great Atlantic and Pacific Tea Co. in Albany. After raising her three sons in Loudonville, she rejoined the labor market and became the office manager for the local chapter of the Boy Scouts of America in Loudonville. Betty and Jack were communicants at St. Pius X Church for more than fifty years. She enjoyed many summers spent at their Lake Lauderdale camp in Southern Washington County and hosted many lively by-the-water birthday and dinner parties for family and friends. She enjoyed attending Saratoga Race Course each August with her stock-piled collection of $2 bills always at the ready to make her win, daily double and exacta wagers. She also loved watching football and would even be known to schedule holiday dinners around halftime of her beloved NY Giants. Betty is survived by her sons Richard (Elizabeth), Gary (Linda) and Michael, daughter-in-law, Regina Yakel Stewart, grandchildren Jody Scott, James, Jeremy and Andrew Stewart, great-grandchildren Kyle and Dylan Scott and Brianna Stewart and dear friend, Kathleen Culliton, who steadfastly supported and aided her for the past eight years. The family would like to send a heartfelt thank you to the staff at The Terrace at Beverwyck and Eddy Village Green at Beverwyck for the personal care given to Betty during the past four months, as well as the Community Hospice staff over the past few weeks of her life. A Mass of Christian Burial will be celebrated on Wednesday May 26 at 10:30 a.m. at St. Pius X Catholic Church, 23 Crumite Road in Loudonville. Entombment will immediately follow in the St. Agnes Cemetery’s mausoleum in Menands. There will be no calling hours. In lieu of flowers, donations may be made to Saratoga Bridges, in support of their education programs for people with disabilities, and mailed to 16 Saratoga Bridges Boulevard, Ballston Spa, New York 12020 or online at saratogabridges.org.
Wednesday
26
May

Share Your Memory of
Elizabeth
Upload Your Memory View All Memories
Be the first to upload a memory!
Share A Memory
Send Flowers
Plant a Tree