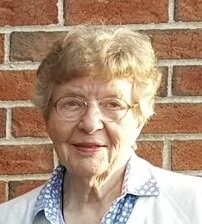 Please share a memory of Beverly to include in a keepsake book for family and friends.
View Tribute Book

With profound sadness and an overwhelming sense of loss, her family and friends will miss her thoughtfulness and kindheartedness, but mostly her presence in their lives. Her death leaves heartaches no one can heal, but her love leaves memories everyone can cherish.

Born in New Haven, CT, she was the daughter of the late Walter and Madeline Jakob. She was predeceased by her beloved husband Charles Speck Sr.

A graduate of Bryant College, she was an administrative secretary retiring from the NYS Unified Court System in 1999.

It was Beverly’s wish that she be remembered for making a difference in the life of a child.

Funeral services were held privately at the convenience of the family with burial in the Saratoga National Cemetery.

Expressions of sympathy may be made in Beverly’s memory to the City Mission of Schenectady, 425 Hamilton St., Schenectady, NY 12305.

Share Your Memory of
Beverly
Upload Your Memory View All Memories
Be the first to upload a memory!
Share A Memory
Send Flowers
Plant a Tree