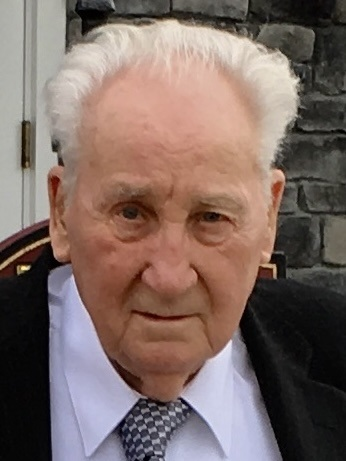 Please share a memory of William to include in a keepsake book for family and friends.
View Tribute Book

William Frisch, beloved husband, father, grandfather and Pop-Pop, age 94, of Coburg Village in Rexford, passed away peacefully on January 15, 2022.  Born in North Bellmore, L.I, he was the son of the late William and Mae Frisch.  He enlisted and served in the US Navy during WWII as a cook aboard the USS Smalley.  He wrote to his high school sweetheart, Tessie, as often as possible.  He later worked in construction and then retired as a court officer in the Supreme Court, in Mineola, with letters of commendation.  He was active with the Clifton Park Elks and was an usher at Corpus Christi Church.

Bill and Tessie moved to Ballston Lake after they retired so they could be closer to their family. They attended their grandchildren’s sports games, concerts, graduations and weddings. He especially enjoyed our Sunday family dinners and spending time with his 5 great grandchildren, which always made his day so special.

His hobbies included woodworking projects, gardening, being a huge fan of the Yankees and Derek Jeter, spending time with his family and taking pride in everything that he did. Bill was delighted to participate in the Honor Flight to Washington, DC, as 1 of 4 WWII veterans, along with Joe and Ryan as his companions on this memorable experience.

The family would like to thank his caregivers, Debra, Shannelle, Rose, Carol and Dawn, for the excellent home care which they have provided, the caring staff at Coburg Village, Bill’s team of numerous physicians, as well as the guidance of Mark and Eric from Catricala Funeral Home.

A Memorial Mass will be held on Friday, June 10 at 11 a.m. at Corpus Christi Church in Round Lake, where the family will be receiving guests starting at 10:15 a.m. Masks are suggested. A military service at the Saratoga National Cemetery will follow.