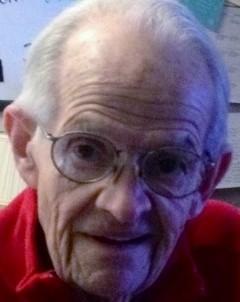 William J. Kuhn age 90 of Lansingburgh, passed away on January 26, 2014 at the Evergreen Commons Nursing Home following a brief illness. He was the son of the late Frank B. Kuhn Sr. and Adelaide Brown Kuhn. He was the husband of the late Clare M. Murphy Kuhn who died on May 9, 2004. Bill was the youngest brother of the late Florence Fleming and late Frank B. Kuhn Jr. Also predeceasing him were his brother and sister in laws, William P. Fleming, Ranald A. Lee, Janet M. Murphy Pelcher, and Marie C. Eagle Kuhn. Bill retired from the Watervliet Arsenal after 35 years of service as a Production Control Supervisor. He was a graduate of St. Augustine’s Academy, LaSalle Institute in Troy and served in the US Army during WWII serving in the Pacific Theater at Pearl Harbor, Guam and Midway. He was the receipent of the American Service Medal, Good Conduct Medal, WWII Victory Medal and the Asiatic Pacific Service Medal. After discharge from the Army in 1946, Bill attended Simmons School of Mortuary Science, Syracuse and attended Russell Sage College Evening Division and many Department of the Army Courses for the Arsenal. He was always proud he was retired longer than he worked at the Arsenal He enjoyed his family and spending time with friends and travelling with his Sister-in-Law Peg Lee, late Brother-in-Law Ranald (Ron) Lee and the love of his life Clare M. Kuhn. They were married 56 years before her passing. He was a strong man of faith and was an active communicant of St. Augustine’s Church and was lighting candles daily and making novenas to the Blessed Mother for special intentions. Bill loved watching baseball and was a great Boston Red Sox fan and very proud of his team. He is survived by his son Daniel J. Kuhn of Clifton Park, his beloved Grandchildren Daniel J. Kuhn (Kate) of Albany, Eric J. Kuhn (Suzanne) of Burnt Hills, Meghan E. Kuhn (John T. Spring) of Clifton Park and Daughter-in-Law Catherine M. Kuhn of Brunswick and Granddaughter-in-Law, Kristen M. Kuhn of Rexford. He is also survived by his Sister-in-Law, Margaret M. (Peg) Lee, eight Great Grandchildren, Griffin D., Ava M., Caley P. Kuhn, Mackenzie and Colin Anslow, Ronan J. Kuhn and Elliot M. and Sophie E. Howard. He is also survived by one remaining cousin, Sr. Anne Theresa Brown, CSJ of Latham, many nieces and nephews. Bill was a pioneer member of the Friends of 112th St., member of the American Legion Post 1450 of Halfmoon and the National Assoc. Retired Federal Employees. He was a former member of the Holy Name Society of St. Augustine’s Church, their Men’s Club and Bowling League and the Lansingburgh Little League as a Coach and Board Member. The family would like to express their sincere thanks to the Staff of Samaritan Hospital, Sunnyview Rehab Hospital and his care givers at Evergreen Commons Nursing Care Facility and Rev. John Henry II Rector of St. George’s Episcopal Church, Clifton Park for faith assistance and prayer during his illness Calling hours will be held on Wednesday from 4 to 8 p.m. at the Catricala Funeral Home Inc., 1597 Route 9, Clifton Park. A Mass of Christian Burial will be celebrated at St. Augustine’s Church, 115th St. and Fourth Ave. Troy on Thursday at 9:30 a.m. Interment will follow with full Military Honors at the Gerald B.H. Solomon National Cemetery, Schuylerville. In lieu of flowers the family requests donations in his memory made to St. Augustine’s Building Restoration, St. George’s Episcopal Church Development Clifton Park or to a charity on one’s choice.